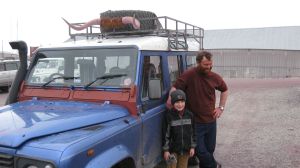 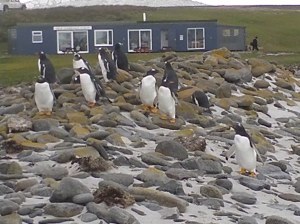 Gintoos on The Way Back from The Beach, Over the Rocks, to the Rookery

Me, On The Beach with A Gintoo, Who Had Been Surfing

Atop Stone Ridge You Can See Bluff Cove Lagoon Below 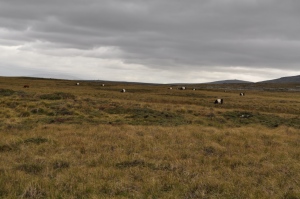 It looks like we are getting better reception and speed.  Let’s see.

After we stopped from our little “walkaround” we had a pub lunch in The Globe near the meeting point on the pier for the Bluff Cove Penguin Rookery tour.  After lunch we met up with the tour people and got on our buses for the first leg of the journey to Bluff Cove.  Our driver was Trudi and she was funny.  She was also a pretty tough lady who didn’t mind reminding people to put on their seat belt.

After about a 10 mile trip down the highway SW of Stanley we arrived at a small turn-off and parking area where there were 5 Land Rover/Defender series 4X4 wating for us.  Each one took 4 people, so, mom, dad and I got in the one that had a set of bullhorns mounted on the roof.  A man from New Zealand named John got in with us.  The driver’s name was Charles and he was Trudi’s husband. Their son drove on of the other Defenders.

Charles drove down the highway another mile and then turned left into what looked like a giant pasture but was a rock-strewn moraine that ran down to a small valley and then up again.  I was able to follow on a little map they gave us of the Bluff Cove Rookery.  It was very bumpy and difficult but Charles knew what he was doing.  He was a sheep and cattle rancher and a farmer.  The drive was very interesting as we were literally in an ocean of rocks tumbled and folded over and over – it was like a scene out of some space movie.  After crossing Gator Bridge and Stone Ridge we were able to see the cove and lagoon in front of us about another 500 feet down the moraine.

Bluff Cove is actually a 36,000 acre ranch with 150 head of Belted Galloway cattle (my dad said they are all named George?) and 3,000 Perendele sheep as well as the penguin rookery and miles of beaches on the lagoons.

After we arrived in Bluff Cove, we were dropped off at the main rookery up from the beach.  There were a number of King penguins there either in the process of hatching or covering and feeding new chicks.  My Mom got some great pictures that I hope to post soon as the reception improves and the speed is better.

Then we walked down to the beach and watched a whole bunch of Gintoo penguins walking on the beach or the stones or out in the waves.  It was like the penguin version of Southampton, Long Island, where I was born.  I will never look at Little Plains beach the same.  After watching these funny little creatures we walked over the rocks to Bluff Cove’s Sea Cabbage Café for coffee, tea and delicious cakes.  My dad loved the scones with clotted crème and local diddle-dee berry jam.  Mom had tea and scones also.  A lady played the accordion and did it by ear.  Her first song was “West Virginia, Mountain Momma” and my dad sang along but out of tune.

After that we looked into the museum and a young girl was playing local folk songs on guitar but we had to go back to our 4X4’s and return to the tender pier for the ship.

It was another tough drive back along the moraine and in fact, my dad says it is one of the most remarkable drives he has ever taken.  When we got back to the pier, I posed with Charles, who I think is the best off-road driver in the world.

This is Frederick and my adventure is just beginning.  Later today we are going to see Cape Horn and then sail up to the Beagle Channel on our way to Ushuaia.

Our Caravan of Defenders Take on The Bluff Cove Ranch Moraines