The Beagle Channel and Ushuaia International Airport from The Chairlift 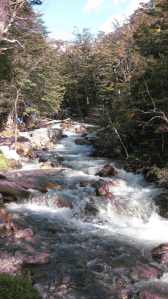 Early this morning, while I was sleeping, we pulled into Ushuaia. Thanks to my Mom, you have the pleasure of seeing the approach to the harbor and our pier in Ushuaia. It is the further most southernmost city in the world. The Chileans claim Puerto Williams, south across the Beagle Channel is but it is more a town than a city.

After breakfast in our cabin, we decided to go directly into the city. It was very warm, over 66F with a chance of showers later. As we walked down the pier we passed an icebreaker turned into an Antarctic cruise ship, a custom sail yacht like none other ever seen, a research ship for the Argentine navy and a commercial fishing vessel that my Dad says is a big-time seine netter. We walked past little shops on the pier selling everything from duty free liquor to jewelry to leathers. Then we passed out onto Avenida Maipu, which is the main street along the harbor.

From there we found a taxi to take us up to the Glaciar Martial where we can catch a chairlift up another 1.8kms and then hike some more up toward the glacier itself.

It was not open when we got there so we joined some people from Chile who are on our ship and went to a little Cabana de Te next to the lift and had coffee, tea, hot chocolate and scones. By the time we were done the lift had opened and we got in line to buy tickets (boletas) for the chairlift. My Dad and I took the first one and my Mom the next one so she could take her pictures. Along the way, we saw people hiking back down from the upper platform (platforma superior) and a flowing creek that sounding like a rushing train as the water flowed quickly over the rocks. My Dad said that would be the purest water you ever tasted since it came from the snowmelt on the glacier and was filtered by the stones and air all the way down to the reservoir in Ushuaia.

We hiked up the mountain (montana) some and took lots of pictures, then came back to the upper platform to take the lift back to the lower platform (inferior platforma). From there we took a taxi back to town and found a few shops for souvenirs. I bought a compass to help me understand were we were and were we are going. My Dad bought a photo book about Ushuaia. We ate lunch in a little restaurant named Tante Sara.

My Dad and I had vanilla milkshakes and burgers while my Mom had a glass of wine from Chile.
We then walked back to the ship because we had to be on board by 2:30pm. A very short stop.

This is Frederick and I just saw the most beautiful mountains and glaciers I have ever seen. Later today, when we cruise the Beagle Channel, past the Cordillera Darwin, I hear we will be in breathtaking country. I can’t wait.

Tomorrow I will post the Beagle Channel but only after we leave Punta Arenas. Then, it may be that we have to suspend the blog due to lack of reception in the Chilean fjords.

Our Approach to The Harbor of Ushuaia, Argentina 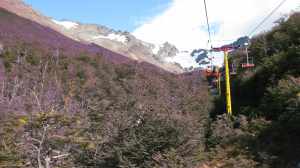 The Chairlift at Glaciar Martial - My First Ride up A Mountain 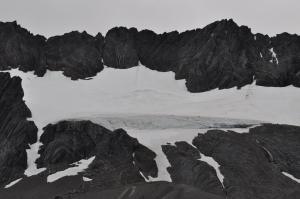 A Close Up of The Martial Glacier from Our Trailhead

3 thoughts on “Ushuaia and The Martial Glacier”