My Dad Says Everyone Gets These Not Just Kids.

Our Sunset That Night Coming out of The Fjords 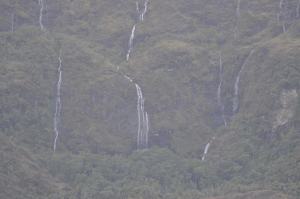 These Waterfall Cataracts Were All Over the Mountains and Rocks 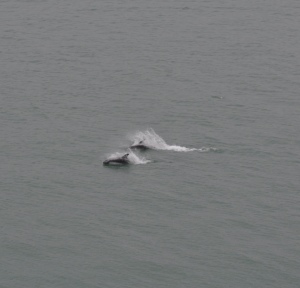 At The Glacier We Found These Dolphins Putting on A Show

One of Two Shipwreck’s We Saw in the Fjords

When We Awoke on the 12th of February This is What Greeted Us.

We left Punta Arenas at 9:30pm (2130hrs) ship’s time or 7:30pm EST.  This was our longest day in any one port since it was were the one-day excursion to Antarctica left from.  Unfortunately, those who were scheduled to fly there were unable to since the weather in Antarctica was not acceptable to the flight crew.  The people who were going were sent to a National Park instead.

When we awoke on the 12th of February, we were well within the Chilean Fjords, somewhere inside the Canal Smith near Isla Manuel Rodriguez on our portside and Peninsula Munoz Gomero on our starboard side.  We continued to sail on a northerly heading correcting from time to time for the many little islets and islands that dot the fjords.  Up past Isla Vancouver and Isla Esperanza toward our destination of Glaciar Amalia in its namesake fjord.  Amalia is part of the Gran Campo de Hielo Patagonia, the mountains, peaks and ice fields that span the fjords.  We passed sunken ships who met with unexpected disaster and came to a final rest against some nameless, yet deadly island.

Finally, we headed to the southeast into a very narrow, restricted fjord.  Ice packs were visible through the dense, cold fog and then we saw the floe of ice as it seemed to blanket the lower level of the rocks in a wide sheet.  Dolphins played in the wake of the ship’s side thrusters as the ship made many pivots so each side of the ship could see and photograph the glacier even though it was almost impossible to see due the limited visibility.

I hope my Mom’s photos do it justice for the incredible raw and undisturbed beauty of this part of the world.  My Dad has a very detailed map of the fjords and there are no settlements other than Puerto Eden and Puerto Natales.  It is barren, vacant desolate land and it is hard to imagine how anyone less they be hermits could live in such a place.

When I came back to my room from Club HAL, I found a serpent waiting for me.  That Imam is a van Gogh of towels.

This is Frederick and I believe more and more in a Supreme Being, as God, since I have seen the fjords of Chile.

Next, we will await our little excursion in Puerto Montt to the Petrohue Falls, Lake Llanquihue and Puerto Varas.  My Dad wanted to go to Chiloe but he didn’t like the way the excursion was planned.  He said next time we come we do an independent trip to Chiloe and visit its independent culture and society.