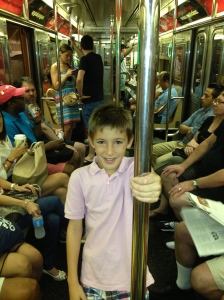 On the train to the US Open

Court 11 for the match of Kenny de Schepper of France V. Bradley Klahn of the US

My Mom and I at Daniel

The Kitchen at Daniel 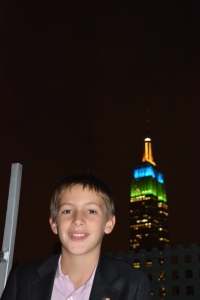 The Empire State Building at night

I am behind in my posting and will only make a brief one today since we are checking out of our hotel and then later we go to JFK Airport for our flight to Brussels.

Yesterday we took the No. 7 subway train to the US Open in Flushing Meadows, Queens. It was a long ride and we must have stopped at 15 stations along the way. Most of the train is above ground but is underground in Manhattan. We caught it at Grand Central Terminal.

At the US Open we had to wait in long lines for security. The first time they used metal detectors and it took us over a half-hour and we didn’t even have bags. We went to several matches including watching the young American Jamie Hampton win her match.

Then we went to the American Express Experience where I played tennis with other kids and did some Xbox games.

Back to the City for dinner at Daniel a very nice French restaurant with 3 Michelin stars.  My Dad says that is the ultimate award for cuisine and dining.  After dinner they gave us a tour of the kitchen. There were over 40 chefs and cooks working in 3 different areas – the Amuse Bouche – the Dinners and then – the pastries and deserts. Very neat and fast.

This is Frederick and I am enjoying New York City.