We arrived in Venice via Marco Polo Airport on the 6th of June and took a water taxi direct to our hotel near the Bridge of Sighs behind Saint Mark’s Square.

In the water taxi from the Airport to our Hotel in San Marco near the Bridge of Sighs.

That evening we had dinner down the street at a small place that was very lively.  When we woke in the morning to the bells of Saint Mark’s Cathedral we were ready to go and explore.  First stop was St. Mark’s Square where it seemed every tourist in Venice was standing. 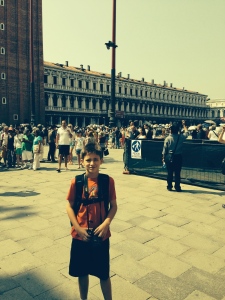 We then walked along the Canal toward Harry’s Bar, past the trinket stalls and the small Royal Gardens.  At Harry’s Bar we stopped to have my picture taken by one of the windows.  My Mom and Dad were last there in 2003 when she was pregnant with me. 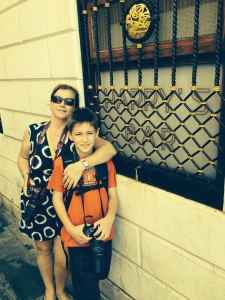 My Mom and I in front of one of the windows of Harry’s Bar.

We then walked down Calle Valllaresso with all the fine shops but with cheeky black guys from Africa selling knock off bags and purses of the same designers in front of their shops!  We stopped at St. Moisé Church so we could go in and see the famous altar piece of Moses on Mt. Sinai being given the tablets of the Ten Commandments.  In the alcove to the left of the main altar is Tintoretto’s “Christ Washing the Disciple’s Feet” but no photos allowed.   I lit a candle for all our dearly departed including our brave men who came ashore Normandy 70 years ago.

Saint Moisé is the church the Venetians in San Marco use because the one on the Square is full of tourists.

I am lighting a candle for all my dearly departed family members. This is the side altar in Saint Moisé.

We continued to walk the narrow alleys and streets to the La Fanice Opera House.

You can’t see me but I am in the shadows in front of La Fanice Opera House. it was closed but there was a concert that evening at 8:00pm that could not get tickets for since it kicks off the Biennale of Venice.

Then somewhere after Campo Manin we found this little archway which I had to explore. 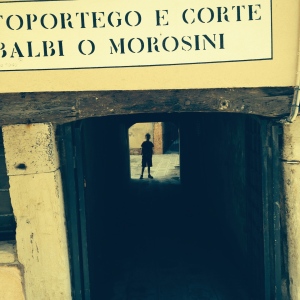 That’s me in the far part of the Soportego E Corte Balbi O Morosini on our walk to the Rialto.

Another neat thing was the building “Scala Contarini del Bovolo”.  It is a cylindrical brick tower with five floors of spiral staircases faced with white marble banisters.  It was built in 1499 and has 113 steps to the top but was closed for renovation when we were there.

Past Campo Manin we took a few little jogs to this very interesting building called ‘Scala Contarini Del Bovolo’ with its exterior winding stair case. It was built in 1499 and allows more room for interiors.

After this building we walked down an alley and popped out on the Grand Canal near the Rialto Bridge.

I am tired, you can see it in my face. I want to stop and have lunch and something to drink. We will after we walk over the Rialto.

Looking down the Grand Canal from the Rialto. The Canal is full of boats, water taxis, vaporreto, gondolas and people from all over the world canoeing and kayaking. 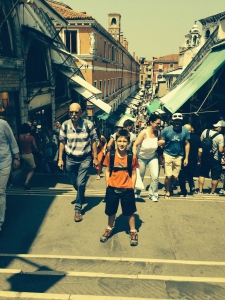 Inside the Rialto with the steps leading to Campo San Giacomo and the produce and fish markets.

Then it was downt the steps of the Rialto into the Campo San Giacomo where the produce and fish markets are located.  I really liked this part because soon it would be time to sit down and have lunch.  I was very tired now.  But my favorite part was the sign for the “measurement of fish legal’ carved into a column at the fish market.  Someone had written “el Mio 3.79cm”  (or Mine is 2 inches:)

The produce market was awesome. They had every kind of vegtable and fruit. And it was very busy with people buying for their evening meals.

On a column at the fish market, there is this list in stone of the legal length of fish. Sardines (Sardon) must be 7 center imeters, mussels (Peocio) must be 3 cm and someone left a penis joke: “El Mio 3.7cm (Mine’s 2 inches:)

My mom and I also took plenty of photos and I will publish a special page of those next.  All these photos are by my Dad on his iPhone.  Next after our visit to Frari and Scoula San Rocco we took a Gondola tour of San Croce and he dropped us off on the other side of the Grand Canal for us to walk back to the hotel.  After we freshened up we went to dinner near La Fanice at Antica Martini.  We sat outside and people watched enjoying the best of Venice cuisine. 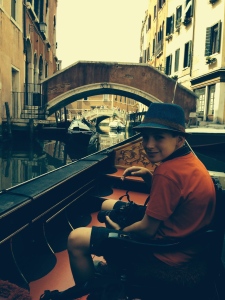 After we visited Frari Church and Scoula San Rocco we took a Gondola through the area of Santa Croce and over the Grand Canal to a place we could walk back to our hotel.

My Mom and I at dinner at the Restaurant Antica Martini on the square which is located La Fanice Opera House.

After dinner at Antica Martini wearing my Dad’s glasses and sun hat. His hat is made out of paper in China and cost him 20 Euro’s. He bought it at Camp La Bacciere where we had lunch near the fish market.

This is Frederick and today we just watched the boat races, 30km from Murano and around Canneregio and down the Grand Canal.  It looked like a team of 4 rowers and coxswain may have won.  We were having coffee at the finish line in one of the Biennale locations which my mom and dad are really here for.  So now its off to visit more Biennale locations.

This is Frederick and we are ready to get lost finding our way around Venice.

One thought on “Hello, Venice!”