Yesterday, we were in Rhodes, the fourth largest island in Greece.  It is also an old walled City due to the Knights of St. John’s who came here in 1306 on their way to Jerusalem and the Crusades.  The built the Old City and walled it in with a huge moat.  The lasted here until the Turks invaded in 1519. 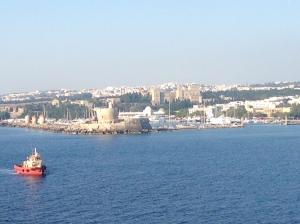 The Walled City of Old Rhodes founded and built by the Knights of St. John Jerusalem in 1306 on their way to the Crusades against Saladin.

The castle of Rhodes in the Walled City

There are impressive castles and other medieval buildings and churches inside the walls including 3 Greek style windmills.

First we took a bus down the east coast to Lindos and the Acropolis.  But once there we decided to take a donkey and ride around the old town while my dad found an English pub named the Sunburnt Arms Bar and had a coffee.  We joined him there later and had drinks while talking to Cliff and his wife Reina, originally from Southeast London.  They were really nice and have been in Rhodes for 23 years.  Lots of ex-pat people are in Rhodes because it is very popular with Brits and other Europeans as a holiday get-away. 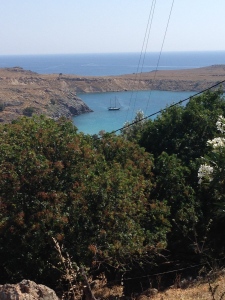 Walking down the road from the bus parking to Lindos Town we saw this sail boat anchored in the bay. 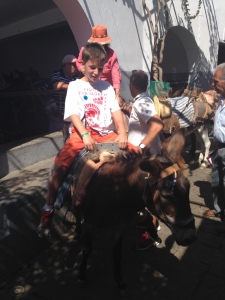 I and my Mom take a Donkey ride in Lindos Old Town.

Me and My Donkey:) 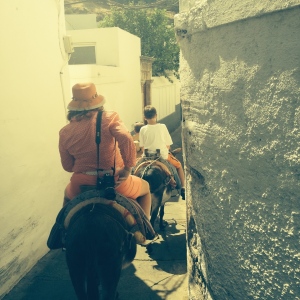 My Mom and I in one of the many alleys on our Donkeys.

This is Cliff, the landlord of the Sunburnt Arms Bar, in Lindos, Rhodes where my dad went for a café kir while my Mom and I rode the donkeys around the alleys and up to the church. 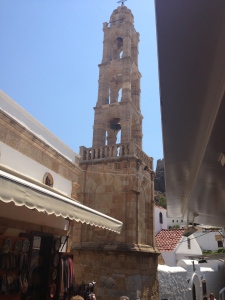 The Bell Tower of the main Greek Orthodox Church in Lindos. 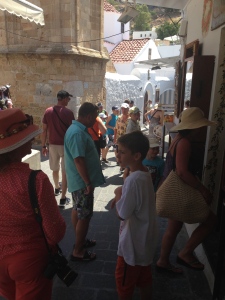 It can get crowded in Lindos.

A Dr. Seuss qoute on a sign outside a wedding shop in Lindos: ” You know you’re in love when you can’t fall asleep because reality is finally better than your dreams.” My dad said he felt that way when he met my Mom.

See how happy I am by the Dr. Seuss sign?

This is Frederick, in Santorini.  So far, I have 2 favorites in Greece – Ephesus and Santorini.  I am coming back.  Watch out!