We are in Santorini (Thira) in a small taverna on the way back to the cable car.  My Mom and I will take the donkey back but my dad is going on the cable car.

Today, I am going to write my post up off-line on Word so that I don’t have to use valuable Wi-Fi time doing it.  But the photos will need Wi-Fi.

Two days ago, we were in Kusadasi, Turkey where we visited the house of the Blessed Virgin Mary, the Mother of God, who lived here under St. John’s protection the last years of her life.  It is small stone house and next to it is an open-air patio where the nuns set up white benches for Mass each day.  Outside the house is a small terrace where a special tree grows and the people would leave notes tied to the tree wishing for something like love, peace or happiness. 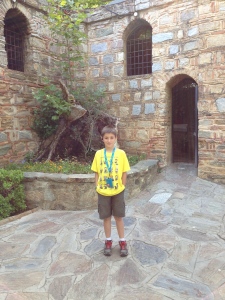 This is me in front of St. Mary’s house in Ephesus. I went inside and lit a candle in memory of my two passed grandmother’s Mamie and Iona.

Outside St. Mary’s House on a terrace wall they write notes of “wishes and hopes” to tie onto ropes hanging on the wall. I wrote for “peace and happiness” in all our lives.

Now, because of damage to the tree, they tie notes to ropes hanging off the rails of the terrace.  I went to inside the house and paid 2 Euro to light a candle and say a prayer to my passed Grandmothers who are in heaven with the Holy Mother and God.

We then got on the bus to tour the ruins of Ephesus below the hill on which St. Mary’s house is located.  Ephesus is the most beautifully preserved ruins of Greco-Roman architecture and it’s era we have seen so far.  From the minute you walk in down the marble slab roads and walkways it is something special.  It really impressed me especially how advanced and cultural the Ephesians were.   No wonder St. Paul and St. John found Ephesus a special place to preach and bring the Greeks to Christ. 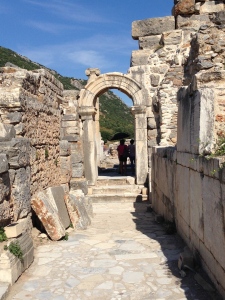 A beautiful arched doorway in the fabulous archeological ruins of E;phesus.

On this street in Ephesus were many shops and fountains.

Looking down the Marble Street toward the Celsus Library in Ephesus

This is the Odeon of Ephesus and is the smaller of the theaters. It was sometimes used as a “congress” for making decisions and discussing politics.

The Men’s Toilets in Ephesus. There were 45 seats like this in the building. Not just toilets for men but rooms where the men could talk, play games or just rest.

This was the road you took to go down to the harbor in Ephesus.

Please enjoy the photos and I will just say that the Library of Celcus, the Odeon, the Ampitheater and the Men’s toilets were the highlight of Ephesus for me.

This is the library of Celsus in Ephesus. Now you know why I think this is the finest archeological site I have seen. There are so many inscriptions in latin and greek left over on the stones and marble they must tell a fascinating story.

The main and largest theater in Ephesus seats 25,000 people. They had tickets which were little round stones, one with a smiley face for comedies and a sad faces for tragedies. On the back of the stone was your seat number. There is a smaller one (Odeon) which was also used as a “congress”.

On this stage there are many concerts including Pavarotti, Elton John, Joan Baez among others. Only acoustic instruments are played and the Sting concert ruined some of the seating because people were jumping and acting crazy.

This is Frederick and my next post is from Rhodes where we make a side trip to Lindos.